Liam hardly ever vomits unprovoked these days. I don't know if you remember way back here when things with Liam were really bad. I mean...bad. I was changing his clothes four times a day and hardly anything was staying down. Now, we can go days with no vomiting! He used to vomit before due to the reflux and delayed emptying of his stomach. But now that we have him emptying quick and the reflux under control, he only vomits when he gags.

Sometimes he will gag on his own thumb or on his baby food. Sometimes it is as benign as putting his mouth on my shoulder and putting his tongue in the wrong position. But they are getting fewer and fewer allowing Liam to keep his food in and keep thoughts of the g-tube away. I never thought I would see the time when we would be able to be vomit free. N e v e r.

All isn't perfect in feeding land, though. We still have his uncoordination in sucking keeping him from really achieving a good draw on the bottle. He is doing better, but will usually only take a portion of it which in turn makes me have to syringe feed him the rest. He is also starting to bite the nipple and won't take the bottle at all. It's fun to see that side of his personality. You know....the one that thinks he is in control. He has also taken to biting the spoon and shaking his head when he doesn't want it. But he still isn't in a position to refuse to eat yet. At least he doesn't mind finishing off a bottle by syringe. I don't know where we would be if he did. Well, yea, I do. But I'm not going there today.

By using the syringe, I have been able to get Liam up to 5 ounces at a bottle. With him getting three bottles a day, we have been able to get him 15 ounces of formula daily. That is an amazing feat. Really. Two months ago, I was struggling to get in 10 ounces a day. And he threw up the moment we went over 3 ounces.

And what is so very wonderful is that I don't have to make him sit still in his chair or on the floor after eating in order to keep him from refluxing. I used to have him sit in his high chair for up to an hour after meals! If we moved him, he would hurl his dinner across the room by using only his mouth. Could be impressive at times. But, mostly it made me cry. Anyway, He can now get out right away and go play because he is keeping it down.

He still has reflux. But now, he doesn't vomit what comes up. This is so good.

He has shown some great signs of improvement with his oral stim with our new OT. We put our finger or a z-vibe in his mouth and put it in the pocket of his cheek to teach him how to pop his cheeks in. Liam has low muscle tone in his face and he doesn't use all those muscles properly yet. You'd never know it by that smile, huh?

Anyway, she was doing her thing with him this week and asked him to POP his cheeks when she put the z-vibe in.

Because he thought it was so darn funny when she would say POP! 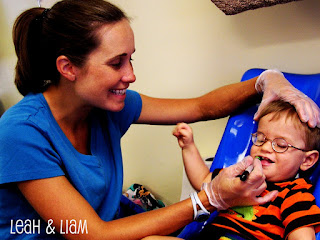 Yay! So you like the Z-stim? We're about to start... Not sure how Dax is going to feel about it?!

Jennifer, you have such beautiful children, I love the new pictures and Liam is so handsome. Kate

Jennifer, you have beautiful children, love the new pictures and Liam is so handsome.
Cate

Love the new layout and pictures..the only thing missing is Shawn. haha I am sure he is quite content for his pic to not be on the site. Really cute pictures...you have such a beautiful family!! Glad to hear about Liam's progress!!

Love the new look! And of course Liam is as cute as ever! I'm so glad to hear of his progress!

Hi Jen! So glad to hear the reflux is going so much better these days. The oral stim sounds really great too-and fun :) Love the new website set-up as well. What a beautiful family you've got. Take Care.