I have been keeping track of how much Liam vomits and he is averaging about 5-6 days a week. It is usually after he gets to the last of the bottle or has finished it. He usually only will spew once a day. He also has a gag reflex and that can start the hurling process. After talking with some other preemie moms I decided to take him to the local Doc and see about putting him on reflux meds. I hate meds! He's a;ready had enough to last a lifetime and he hasn't been on any meds since we left the hospital. If he needs it fine- but I am hoping he outgrows it. Rylie had it bad until she was 5 months old but she outgrew it. And she was never on meds. Of course that was 12 years ago and they didn't do things like that as much as they do today. You know- if you have a symptom lets medicate it... But seriously- if he needs it I am more than happy to give it to him. Fighting to get every little CC in him each day makes me want to put him on meds so he can keep down all of "our" work. But- I am also realistic. I have taken PPI's for YEARS and I still have terrible reflux.

We had friends over last night for dinner and Liam didn't want to eat. I tried to convince him he wanted it but it was a no go. I didn't feel like going through all of my tried and true methods in front of others. I can kiss his feet while he eats, kiss his hands, give him a massage, walk really fast holding him, etc... If I can take his mind off of eating I can usually get him to eat. But sometimes he flat out refises, like last night, and I feel inadequate in the whole process. I am wondering how well he is doing on his weight gain since we aren't getting any more volume in lately. We hit the 16 oz mark per day and can't get past it. Most days I am lucky to get 14 or 15 ounces. I am thinking we may need to increase his calories again. I am praying he will start to love his bottle. I think he also has a terrible sucking pattern. He can't keep his paci in his mouth yet and when he sucks on the bottle he does this wierd thing lately with his toungue. He flicks it out of his mouth and then that helps him gag. Or he curls it under the bottle and pushes it. Obviously he is getting more aware of the fact that he can be in control of that nipple. But when he does suck the bottle he doesn't do it very strongly. I did stick my thumb in his mouth tonight and he used it like a pacifier and I thought he was very strong with it! Maybe it's just the bottle. Where is his God given desire for hunger?? It just passes these micro preemies by but we are in it for the long haul. Sigh....
As told by Jennifer at 9:32 PM 2 comments:

Liam laughed last night. It was the most adorable thing ever!! It was purely by accident but then he did it again and again. He was fussy last night and nothing would get him to stop crying...even his bath which he normally loves didn't seem to soothe him like usual (I think the rain forest tub is uncomfortable but that is another post). So after his bath he is still fussing and I had him laying on the couch. He started to cry and I took his arms and started to do the little games we play when the cry turned into a laugh. Then I did it again and he continued to laugh. He did it again and again and by the time Ian got the camera to record it he had stopped. But it was so darn cute! Rylie got him to chuckle just a tad today too. So it wasn't a fluke!

Liam had his OT today. He needs more work on his head control so we are consistently trying to get him to work his heavy head into an upright position. He doesn't mind his tummy too much but he won't attempt to lift his head anymore when on it. Once he realized his fingers were in perfect alignment with his mouth when on his tummy he knew there were much better things to do than waste energy lifting his head! He's smart, I tell ya! It's funny because he is finally starting to pick up the traits that newborns or 1-2 month babies have. He will suck on my shoulder, grab my shirt when eating and he startles really easily on his changing table.

Rylie was at MFuge all this past week for a Christian/missions oriented camp experience. It is in Greenville, SC. She loved it. She was with a group teaching VBS to kids in the community and would call home with excitement each day that a child was saved. She has such a sweet heart...always has....and it was wonderful to see the Lord working in her life each day. Now the kids are at our church for VBS this week but since Rylie is too old for it she helps out. There is over 400 kids!

And I actually got out to a class get together this past weekend! I know- they couldn't believe it either. I hadn't seen some of the guys in almost 7 months and Phillip didn't even realize who I was for ten minutes! We were at the river for a boating day and the big kids got to go tubing. Liam was very well behaved. I did head home to feed him though and came back when he was done. Honestly, it's just much easier that way.
As told by Jennifer at 8:23 PM 2 comments:

Little longer clip of the kids playing with their new toy...

Liam squealed today! ;-) He is starting to show his personality. I can't tell you how much fun it is to see him acting like a normal baby. It amazes me that he can have so much fun with such limited vision!

Liam did have a vision therapy appointment today. She seemed to think he still needs to mature. I am praying so. She gave me a plan of activities to stimulate Liam and help him understand his world even tho he isn't seeing right. It is encouraging to see things that will help him and I get to go buy toys!!
As told by Jennifer at 7:53 PM 1 comment:

What a joy it is to go to the Dr. and get good news. Rylie had her 2 year cardio check up today and after a thorough exam she was declared perfectly healthy! Everything looked great- So no more complaining that your heart hurts, Rylie... you are just out of shape! ;-)

Since Rylie's Dr. was in the town Liam was born in we took him to the hospital to visit his NICU nurses. It's hard to believe we've been gone 3 months and yet Liam has changed so much in that time. He was huge to them... It was good to be there and not be the patient! He was fussy tho- chock it up to hunger and attitude for having to sit in a car seat so long.

I'm so proud of him- Liam ate over 16 oz yesterday! I mean, really, thats very good! So now that I know he can do it I will expect that good of a performance from now on. Unfortunately we won't make that goal today though. Liam got a serious case of the hiccups after his last bottle and it made him throw it up. So much for perfection today... 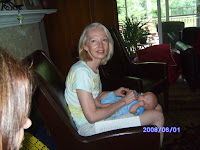 Liam fills up her lap now- not as little as he once was! 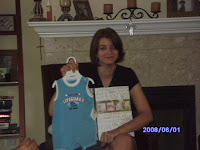 I can't wait until Liam is this size. 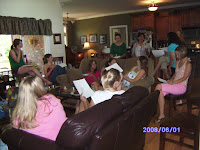 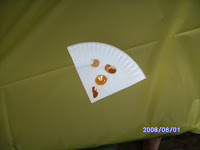 Baby food tasting game- I no longer wonder at the amzing faces babies give when you feed them that stuff. 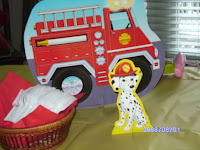 Firetrucks for my big man at his big party.

Liam and I had the baby shower Sunday. It was a lot of fun! It was good to be seen-I've been absent from the world since the day the boys were born. Thanks to everyone who was able to come! Liam slept pretty much through the whole thing. It was nice for people to finally get to meet him- and Liam made his first cooing sound! YEA! They also got to see what I face when it comes time to feedings and Liam doesn't care to eat. Thats why I don't head to church yet- I don't know if I could find a space to hole up and force him to eat. I can't imagine what someone would think if they saw me trying to force a bottle on a baby who clearly doesn't want it.

Liam got circumcised yesterday. It isn't like when Ian was done 10 years ago. They give a block to prevent pain. They kind of gauge how good the block is by when they put the clamp on "it" to hold it in place. Liam was fine- no fussing or nothing... but before she could finish she could tell the block wasn't good cuz he was feeling the pain. I gave him Tylenol through out the day to minimize his discomfort. He is feeling SO much better today. The swelling is down dramatically and it doesn't seem to bother him now.

Ok- Liam has this month to be able to "see" me. I need to be able to tell that when he glances my way that he is actually looking at me. He needs to focus on me. If he doesn't do it by the end of this month then we have to go back to Duke and have more tests. So- we are praying with out ceasing that today is the day. He is starting to cross his eyes some like babies do when they try to focus so I am hopeful that that is what is going on. Please pray with us that it happens soon!
As told by Jennifer at 12:37 PM 1 comment: