Last year some shocking details were left out in advance of a procedure Liam went through. At the surgical consult, surgery, and subsequent 5 day hospital stay, no one ever thought to mention some pretty significant details, not even the doctors. I discovered the particulars on my own at one of the follow up appointments when they hung his x-rays up on the wall. They didn't look right and I snapped a quick picture with my phone as the doctor hurried out of the room. The Chapel Hill orthopedics department was packed full that day and we were lucky to get a room to get Liam's casts off. They were afraid they'd have to do them in the hall and with everyone rushing everywhere the doctor gave us just a few minutes of his time with broad grins about how great Liam was looking and that he was healing well. But to me, the x-ray look awful. 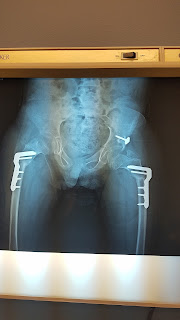 As soon as we got to the car I started looking at the picture. I couldn't wrap my brain around what I was seeing and Liam's newly uncasted legs were giving him fits so I had to care for him all the way home. Once we got home I started to dig a bit further into the weird picture and the obvious metal plates shining back at me that I had never before seen nor even knew existed.


It's quite shocking to be looking at your child's 4 week post op x-rays and come to the horrifying realization that they cut his thighs in half and braced them back together with titanium brackets and you had no idea it had been done. I was just sick to my stomach. I was physically ill all weekend. I messaged friends in the field trying to figure out what had happened.

Liam had been in a lot of pain during recovery and we assumed it was just a lot of discomfort from the tendon lengthening and the heavy casts with his legs spread 16" apart along with the hip correction. Apparently, there was a whole lot more to his surgery than the doctor initially let on.

I called the doctor bright and early Monday and shared my feelings about our big surprise. He was just as taken aback by my reaction as I was by his insistence that he had told me all about cutting the femurs in the pre-op consult. I firmly told him he was mistaken and reiterated a significant detail he told me at the consult. He said that he won't do this surgery on all the kids who come in needing it if they don't have a good home life, won't receive the proper post-op care, and won't get adequate therapy and follow up over the years to come. He told me he would do the surgery on Liam because he knew he was well taken care of and it would improve his quality of life and then he told me all about how they might have to use cadaver bone, would have to put a bolt in his hip, would try to save the socket, etc... I was able to recall almost the entire conversation with him.


When I reminded him of our talk he halfheartedly admitted that he probably didn't fully explain the entire surgery. When he told me they would cut Liam's femurs, we had been talking about the ball and socket where his left hip was coming out.

He never stated he was going to cut both of his femurs mid thigh, realign them, and brace them. If he had, I never, ever, would have consented to having his right leg done. There was nothing severely wrong with that leg. The right leg didn't have an issue that needed such significant surgical correction. I would never have allowed both of his legs to essential be broken and casted at the same time, when the one wasn't even an issue.

We were in the middle of the school year when we scheduled the surgery, having been told Liam would only need a week to recover. I would have known Liam needed more time to recover than a week and wouldn't have scheduled it when we did if I'd known everything involved. He ended up missing an entire month of school, because who wants to go to school with two broken legs in casts that are separated with a bar? And all along we just thought he was just miserably uncomfortable, not recovering from two broken legs.


When he admitted to not telling me all of the details, he stated that maybe the parents who are fully invested in their kids should see an x-ray of what their child's legs would look like after surgery so they know what to expect. I told him that was an excellent idea as I didn't get a say so before hand on what was coming. When I told him I never would have consented to the surgery on the right leg he tried to tell me that it would have had to eventually be done anyway, "because you see that happen all the time in these kids". Which frustrated me all the more because, as the parent, I get the final say so in how my son is medically treated. I should have been given the option to say no. I should have been told so I could have lessened Liam's suffering and prevented an unnecessary procedure from happening. It was not the doctor's decision to make in this instance. It was entirely mine.

Over the past year Liam has lost a lot of rotation and flexibility in his hips, had a significant increase in clonus of both legs (muscle spasms), he gets cold very quickly, and he no longer would lay on his side due to the protrusion of the plates. They were very hard and uncomfortable.

After a full year, if proper bone growth has taken place, you can opt to have the hardware removed. Which is exactly what we did. I couldn't wait to get those stupid plates out of his body and scheduled to have it done right at the one year mark. It couldn't come fast enough.

We are only a week post op and I can tell he feels better already. Once all the swelling goes down, the pain subsides, and his incisions fully heal, I think we will have a much happier little boy.

He already has more movement back in his legs and I'm looking forward to the day when he can cuddle with me again. We haven't been able to do that in over a year.

I am always learning on this journey we are on. I thought I had asked all the right questions, I thought I knew exactly what was taking place during the surgery, and I thought I was well informed of the recovery. I wasn't. I can't beat myself up over it when he admitted to not telling me all the details, but it just goes to show that you can think you know what you are getting into when you suddenly find yourself thrown from your high horse into the ditch, trying to pick yourself back up, and wondering what the heck just happened.  So, we saddle right back on up, and keep on keeping on. :)