Some people say I am too sensitive. I might be. I know having a kiddo with issues has made me a whole lot more sensitive to a whole lot of different things.

I think it's a good thing.

If not used properly I suppose being sensitive could keep me from putting on my big girl pants and facing the world. Or it could have me getting defensive at every little thing thinking that somehow things are personal.

This past week Liam had his yearly eye exam at Duke. I'm not sure the position/title of the first person we see when we go but we always see someone in training who does some tests and records it all in his chart. This time the lady put up a large Minnie Mouse toy that spun around and lit up. She moved it left, right, up and down seeing if Liam would track it. He did it all but the going up. He doesn't visually move his eyes up.

Then she asked me if he would reach out and touch Minnie.  I told her that yes he would, but that I would have to tell him to do it (he just doesn't do it on his own because of how much work it takes).

She then put Minnie in front of him and I asked him to touch Minnie. As he started to move his arms she put Minnie back on the counter and started to write in his chart. For about a half a second I was flabbergasted and then went into advocate mode. I told her that he has CP and you have to give him time. He can't just reach out and grab something the moment we ask. He has to think about it, then think about what arm to use, how far he needs to reach, and then he has to think about activating the right muscles. It's a complex process for him and you have to give him time!

I took Minnie off the counter and put it back in front of Liam who was still trying to bring his arms into place. He looked at Minnie and smiled and slowly got his hand onto her as the lady exclaims, "Oh, look at him go for it!".

After that she said they had to dilate his eyes.

And then she asked me, "Should I just put the drops in his eyes or do you want me to tell him what I am doing?"

Seriously? You have to ask me that?

I told her so with out so many exclamation marks.

This is a pediatric ophthalmology department. You assume that all patients understand what you are doing and saying and you treat every patient the same: with respect, kindness and patience...just like you would want to be treated.

If she didn't know that before. I hope she understands that now.


*That is Liam's needed correction for his near sightedness. It's unchanged from last year. 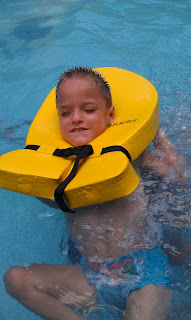 Gah. Liam is getting so big! He finally outgrew his infant (up to 30 lb) life vest that we used for pool play time. His awesome first PT bought it for him so he could enjoy the water. We've been squishing his body into it for the last two summers but this year his head just got too big for it and it just wasn't going to work anymore.

They don't make life vests with neck collars in larger kid sizes that you can buy at Wal-Mart. We have to head into the realm of special adaptive equipment now.

I looked all over the internet googling terms like crazy. I did find a company in Canada that makes an awesome life vest for disabled kids and adults that mimics the infant vests. I was hoping to get that one for Liam until I got the price quote. Almost $300. =(

Most of the neck collars were in the $100 range and I really wanted more support for him. But then a mom mentioned this Kiefer one and it only cost $30!  That's unheard of in special kid stuff. Nothing is ever cheap for our guys and with that price I couldn't go wrong.

This one works great too! You can't go far away from Liam because this isn't a life saving device. Liam will get so excited in the water that he starts splashing water all over himself and floods his chin area. Or he will get so excited that his tiny chin pops through the hole for his neck. So, you need to be close by and keep your eyes on him.

But it is a wonderfully cheap way for Liam to get in the water, get silly, and feel just like a 'typical' kid!

Glimpse of the past 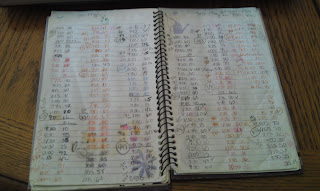 I ran across this book today while sorting out my book shelf. Every single line in it is filled. Filled with numbers and times.

It's a journal recording every cc of milk Liam took in in his early days. Not every ounce. But every cc*.

I would write down every drop he took, keeping track of the calories and the volume.

We originally started out with 300 cc's a day. Sometimes not even that. That would be just a measly 10 ounces of food he was getting on those 'good' days. That was it.

As I flip through the book we gradually get higher. On a good day we could get 500 cc's in (not counting how much came out with all of the vomiting he used to do back then). But for the most part Liam hovered around 350 and 400 cc's.

Looking back on this book I'm reminded of how far we've come.

I was so against the g-tube for so long. And we all did a great job preventing Liam from getting it at a very young age. We delayed the inevitable for as long as we thought we could. But we felt like we were giving up when we finally did break down and get it. We felt like we were failing Liam by giving in.

Seeing this book today reminds me of how hard it was, for all of us, in the beginning.

And it reminds me to be thankful that that chapter is done and gone.

How Liam spent the day: 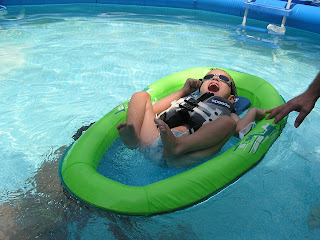 Giggling whenever his sister would blow bubbles underneath him. 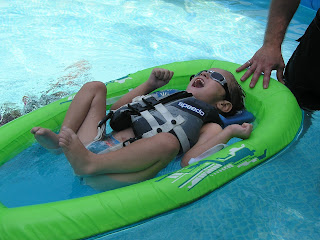 Giggling in anticipation of his sister blowing bubbles underneath him. 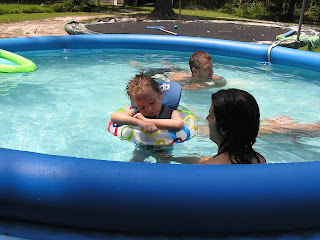 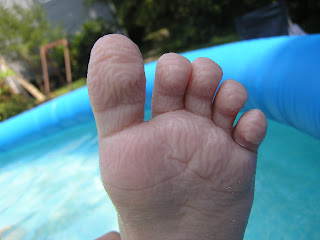 The official lazy days of summer have hit this household.


We ended the night with Liam exhausted from the pool and asleep before 8.

Ian had some friends over and we celebrated by shooting off our own fireworks. 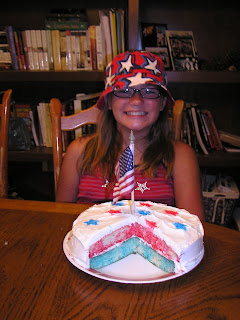 I hope your Independence day was grand!