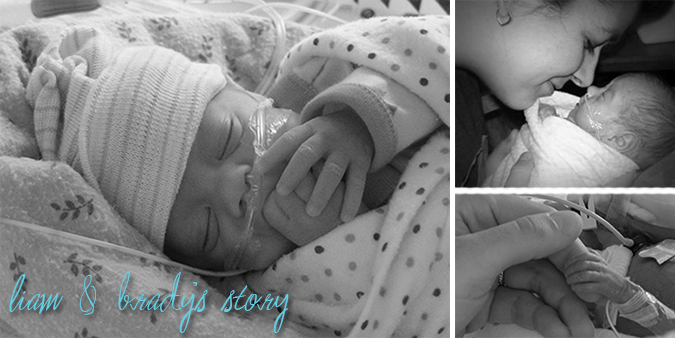 Three months after the stillbirth of Kyle Ann, we unexpectedly found ourselves pregnant again. We definitely weren't planning it and it came as quite a surprise. I have never experienced morning sickness with any of my pregnancies so it came as quite a shock for me to be so very sick. I would spend hours of my day nauseous and in bed. I told Shawn something was wrong. When I went to my OB, he ordered an ultrasound which showed yet another shock. We were having twins!

While considered high risk due to my bicornuate uterus and because it was a multiples pregnancy, I was told once I reached the 21 week mark I would start to see a high risk doctor an hour from my house.

I was forced to switch Dr's from the high risk practice because I felt I wasn't receiving the proper care I and my boys needed. I was worried something could happen and they weren't taking my medical situation seriously. And sure enough the worst happened.

At 23 weeks and 7 days I unexpectedly lost my mucous plug. I had no idea what had happened but I didn't want to take any chances with the boys after losing Kyle Ann. I headed to the local OB and he checked my cervix. He said everything felt fine but sent me off to the hospital for a quick ultrasound to check the boys.

I called Shawn, grabbed some Taco Bell, and headed alone to the ER.

Once I got in, the tech started the ultrasound and I knew immediately something was wrong. His face looked ashen. His demeanor had changed. I asked how the boys were and he said they looked good. Then I asked how my cervix was and he said it was funneling. I knew that was bad news.