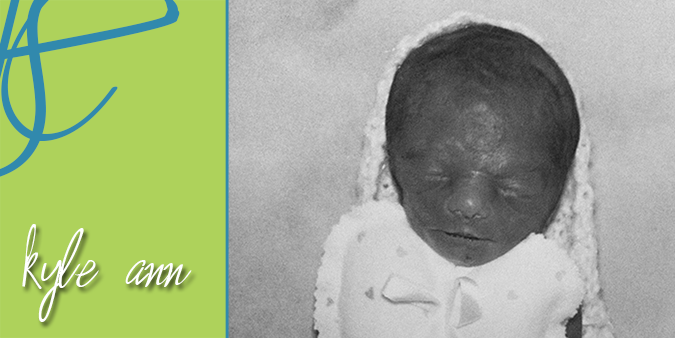 Shawn and I moved our family to NC in September of 2006.  I was thrilled to find out within a couple of weeks of moving here that I had gotten pregnant on our first night in NC. My pregnancies are always easy and uneventful and I sailed through the first trimester with no problems at all. As I entered my second trimester I started to feel tired and worn out and although I looked good and everything was alright with our baby girl, I just didn't feel good and was thankful that it would be my last pregnancy.

We couldn't decide on a name and time continued to go by with no agreement as to what her name should be. I did notice that she was a pretty quiet kiddo because I didn't feel her kick as hard and as often as I remembered my other kids doing.  I was thinking that it was a sign that this little girl was going to be gentle in spirit and easy going. And I thought we should find a name to match.

On Wednesday February 28, 2007 I woke up swollen. It was weird because it was all of a sudden and unexpected. When I went to church that night my friends had even noticed the difference. They joked me that I had a long time left looking that swollen. The weather wasn't any reason for me to be so big and I wasn't far enough along to be retaining so much fluid. However, because I felt fine and I had no symptoms anywhere else, I didn't think anything negative and carried on as usual.

On Friday, March 2, I realized I hadn't felt our little girl move in a while. Shawn and I were busy reflooring our kitchen and I assumed I had been busy and just didn't feel her. She was very small still and because I usually didn't feel her much I still didn't think anything was wrong. I did make note to pause throughout the day to feel for her and as the day progressed I never felt her.

On Saturday, March 3, I finally told Shawn that I thought something was wrong. I was hoping I was wrong and didn't want to worry him. He told me to call the Dr. and they had me come in right away. The look on the techs face gave away what I knew had happened. Our baby girl had died. And according to the ultrasound she had been gone for a couple of days.

I was devastated.  I had failed at my very first job for her; providing a warm, protected, safe place until her birth. I failed to carry our little girl.

The Dr told me I could let my body take it's time and decide for itself when it was ready to let go. But I was afraid that since she had been gone for 2 days already and I was showing no signs of letting go that it could take a long time. I didn't want to go home to the kids and wait for everything to happen so I had them induce me at that point.

Because I was only 6 months pregnant they would not give me anything other than light pain meds for management.  Her birth was my first one with no epidural and I was ok with that. I wanted to feel every contraction, I wanted to be punished for not being able to carry my girl to full term. And I knew that if it was painful I would remember the moments better. And I needed to remember them because it was all I was every going to have with her.

When she finally arrived she was sweet and beautiful in every way. She looked exactly like Aidan and I couldn't get over how perfect she was.  I held her for what seemed like hours before I allowed them to take her away. They promised me they would take care of her and the photographer would be taking photos of her. Because I was only 6 months into the pregnancy I hadn't worried about buying anything for her yet. I had no mementos, no trinkets, nothing that connected me to her so I treasure the photos they took of her because it's all I have of her existence.

Before they took her away, I named her Kyle Ann. I couldn't let our sweet girl be buried nameless and I didn't want to name her any of the names we had debated over since we had never come to an agreement. I choice Kyle because I had always loved it as a girls name and Ann after my middle name. I felt like I would have an additional tie to her knowing I do have a daughter named after me even though she's already with Jesus.

We buried Kyle Ann, memorialized her short life and what we were looking forward to doing with her, and picked a grave stone.

I still miss her,. It's hard for me to think of her because I miss this little girl that I never even got to know.  But I know she's with Jesus. And because of that, I am thankful for her existence and what we went through, because she does still exists. And I will see her again. <3 br="">