I wrote this late last night and forgot to publish it. At 3:30 this morning Liam started cracking up, laughing and kicking in his bed. I rolled over, laughed myself at his special night time visit just for his birthday and went back to sleep. Somehow, while Liam was having such a good time, he managed to get onto the floor. He has not been able to get out of his bed since we moved him to a toddler bed with a rail and keep a pool noodle underneath the sheet as a barrier. Both are still in tact this morning yet Liam was found sound asleep down on the floor. =)


Separated for now, but twins always and forever...happy birthday my sweet baby boys! Brady, I know Liam talks to you  in the wee hours of the morning when the room is dark and quiet and everyone is asleep. I love how he giggles and he gets so excited, it's a different kind of laughter than what we normally hear around here from him. He only does it in the early morning hours when no one is looking. Does he see Kyle Ann too? I know you are playing with her and getting to spend your birthday with Jesus. I'm so happy for you guys! Even though we miss you so much and some times things are tough, I can't wish you back because you're in such an amazing place!

We'll see you someday though and I can wish you happy birthday in person then. For now, we will just have to celebrate twice as hard here and now with Liam. 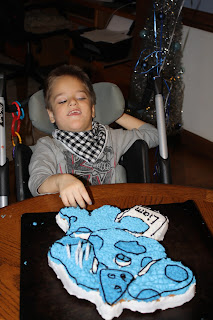 Brady, while your body is whole and you can dance, and play and sing, Liam's is not quite there yet. It makes things tough on us at times so when you see Jesus, put in a good word for your brother about some healing needed down here! We keep up our prayers and can't wait to see what He's going to do still! 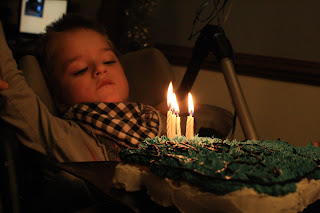 Liam, you have changed our world! The love you've brought to this family has us ridiculously blessed. Who could have known that watching you learn the simplest of things could bring so much joy. Nothing you do is ever taken for granted. Your endless supply of smiles and your goofy giggles light up even the darkest days. These 5 years have been really hard but so worth it. You've made your momma and daddy better people just by being here. You've taught your siblings and us compassion, empathy, sympathy, and appreciation. You've taught us joy in the moments and that being disabled isn't the worst thing that can happen to you. Being different is how God planned for you to be! You may not work like the rest of us but you are still made in God's perfect image. He's got our backs through all of this and everything has been on purpose. And someday, you will be better! 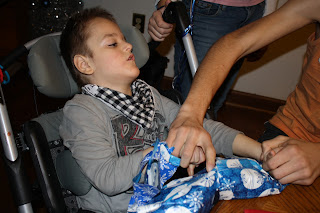 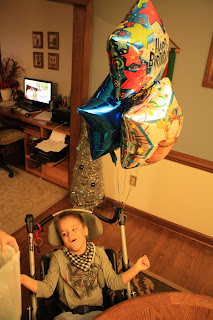 Thank you, my boys, for the joy you have given me these last five years. May your birthday be a celebration of the happiness you are in our lives and an appreciation of the gift that God has given us in you.

I wish I could plan something in our community for the special needs kids at Halloween. This holiday can be the toughest of them all for our children. There are numerous issues that can impact a special child's ability to enjoy this day:
Just one of these things can seriously impact a child's enjoyment of this holiday let alone having more than one thing on that list (which is by no means exhaustive).

Liam has several of the issues on that list that prevent him from enjoying Halloween. We try to make the best of it, but there is not a neighborhood anywhere around where he can go from door to door in his wheelchair and participate in trick-or-treating (narrow paths, steps, uneven walkways, etc. not to mention Halloween decor that he will grab and take with him). And everything is so dark he can't see what's going on very well either.

If I were able to plan a Halloween for our kids I would love to have trick-or-treating take place in the mall. It's bright, open, wheelchair accessible, and could give many special needs kids a safe place to trick-or-treat. There could be numerous ways in which to give kids a chance to go 'door to door' inside a mall (have booths set up, tables, refrigerator boxes for houses, etc) and let them experience Halloween in an environment better suited to their needs. How cool would that be for them...

We took Liam to our church's fall festival this year instead of going with his older siblings trick-or-treating. He wasn't having much fun though and had been coughing, getting progressively worse as the evening progressed. By 7:15 he was conked out and running a fever. So much for showing him how much fun Halloween can be by getting gobs of candy and sharing it with his mom...

Special needs kids truly have unique, different needs that can be misunderstood and overlooked. In the midst of the chaos of trick or treaters, costumes, and candy, are a large minority of kids who just want to participate but can't.

God has a way of getting you where he wants you, no matter how long it takes. He is patient. Oh, so very patient. And he will place every opportunity in your path that is necessary to get you to see what needs to be seen. We just choose to look away. We choose to not see. For fear. For pain. For anger. For Rejection and so many other reasons.

I am not a leader. I do good in second command but leading is not my forte. So when I was asked a couple of years ago to lead a support group of moms with special needs kids I immediately said no.

I didn't even think about leading a group again until this past summer. The thought managed to creep in to my mind. It seeped into my heart. It gnawed at me but I pushed it away. It's not my thing. I was questioning where on Earth this idea was coming from, so out of the blue like that, while I should have known the thought wasn't coming from Earth at all. It was being written in my heart from the Heavens.

I truly pondered the crazy idea of leading a support group.  I rationalized myself out of it though. I am not a leader. I don't want to be in charge. I don't pray well out loud. I stumble over my words. I talk too fast. I talk too much. I don't know enough scripture. My heart is still healing how can I lead a group. And on and on I went getting the idea to disappear.

And then in October I was talking to a friend when I heard the idea creep in again. This crazy idea was even stronger than before. And before I talked myself out of it, while I still felt a strong link to it, I shot off an email to one of our pastors asking if they even liked the idea. I asked if they could give us a place to meet. I asked if they would come along side and support such a ministry if one existed. I asked what they thought of it all the while not committing to leading it. Never thinking I should lead. Just wondering if it was something they would be interested in having at our church.

While I waited to hear back from the pastor about his thoughts, I received immediate confirmation that I was doing what God had desired from me for sometime. He was patiently waiting on me to be ready. And when I started to test out whether this was really something the Lord was leading me to do, he confirmed it. How so? Minutes after shooting off the email to the pastor, an email arrived in my inbox. It was from the woman who had asked me two years earlier to lead a support group. She sent me a message asking me again because she said there is such a need here for it and she thought I should do it.

Imagine the coincidence: I don't talk to this woman often and have not talked to her about leading a support group in years. And she just so happens to send me an email asking me if I would lead one while I just so happened to be waiting on a reply to an email I had sent minutes earlier asking our church about starting a group.

I do not believe in those kinds of coincidences.

I believe my very patient God waited on me until I was ready to entertain the idea. And when I finally entertained the idea, testing to see if God was serious about using someone like me, he gently said yes. He has showed me that I didn't need to be ready, I just need to trust him.

God doesn't always call the qualified. He qualifies the called. That's what I'm banking on. 'Cause I'm just a girl from the Ozarks who's never been a leader.