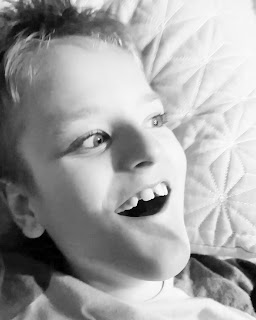 So many changes for Liam this year in his communication. Exactly one year ago Liam got his first augmentative communication device. He got the Tobii Dynavoxx and uses his eyes to scan and make choices. We have wished for this for him for so long and it was definitely a gift to finally get it in hand.

Liam's speech therapist has been awesome. She gets frustrated with kids like Liam because she wishes she had been involved in their therapies before now. She wishes he had gotten the eye gaze years ago. Studies show that the earlier they get the device they better they do. Duh.

I attempted years ago to get an eye gaze for Liam. We spent an hour with a rep talking about the devices available and attempted to get Liam to use it. The appointment ended with us being told Liam needed to know more verbs before using the device. Dumb. So dumb. How can you even carry on a conversation with out using verbs? I was frustrated.That speech therapist quit that week and we went with out until we finally got the one we have now. Did I tell you she's awesome?

She has been so supportive. She saw right away that we could train Liam to use one. For Liam it isn't just about teaching him to use the device to communicate it is also training his eye muscles. His cerebral palsy affects his eyes. It can make them tire out quicker and the weak muscles have a harder time staying focused.

The eye gaze has a lot of activities that Liam can utilize such as games, books, etc. and we can create pages as we go. He does a great job of telling his therapist Hi and Bye appropriately. :) She also sees when he chooses not to participate and he gets in trouble. I think that's a great thing!

We've also implemented using a PODD for quicker home access and communication. I'll explain more on that in another post but using two forms of communication, obviously along with speaking to him, are really helping his communication emerge. I'm amazed at some of the things he says while at school and love hearing how supportive his teacher and one to one are with trying to reach my wee man.