February Was Full of Fun

This month has certainly been challenging. Special needs parents face a whole other situation when our littles get sick. Compound that with being non verbal and you've got a fun experiment in trying to be a doctor with no idea where the patient is hurting.

Liam got a cold early in February that didn't want to let go. When the fever started and was still going strong 5 days later I finally braved the sick waiting room at the pediatrician to see what was going on. His ears, chest, and nose were clear and with the low grade fever he was diagnosed with sinusitis. With amoxicillin on board he started feeling better. But a week later the fever returned. Took him back in and the diagnosis was sinusitis again. This time they put him on augmentin. Several days into the augmentin the fever disappeared but the vomiting started. Cue traumatic flashbacks of the days when Liam threw up 5 times a day. 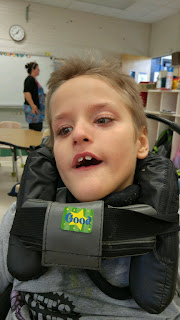 We are pretty darn good at trying to catch what Liam's spews which thank God are few and far between these days. But the ones in the middle of the night, those get nasty messy. Last night we went through 3 bed changes, 3 changes of clothes, draining his stomach so we wouldn't be woken up by hurling again, with a subsequent permanent wake up call at 4 am. 😱

We are thinking the augmentin was making him feel miserable along with the uncommon side effect of completely slowing down his bowels probably made him so miserable and uncomfortable for so many days.

See how red his face his? Poor wee man kept it together as long as he could. 💗