Wow- It's been a while since I have posted but we have certainly been busy! Rylie's best friend , Sabrina, flew in from CA for a week long visit (we lived there for 6 1/2 years). We all had such a great time hanging out with her. We took Rylie and Sabrina to Busch Gardens in Virginia (only a 3 hour trip) for a late b-day present for Rylie. It was just Shawn and I and the two girls for the day. I left Liam at home with my mom and it was the first time I have been gone from him since I brought him home from the hospital! He survived ok- I think he really didn't miss me much (he doesn't know what he's got yet!) and I did ok too. I called home quite a bit but I knew he was in great hands. 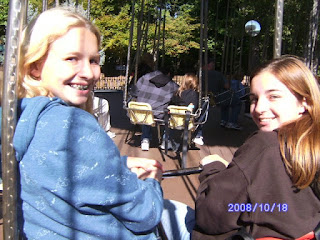 The week Sabrina was here went by so darn fast. I can't believe she went back home already. Luckily she flew right into New Bern so it only took me 5 minutes to get to the airport. One of these days Rylie will need to get brave and fly alone to visit her like she does us. But we already have our next trip planned out and if it all works out we will be going to Disney World and meeting up with her there and bringing her back here. So Rylie is off the hook again. I know she's breathing a big sigh of relief on that one. 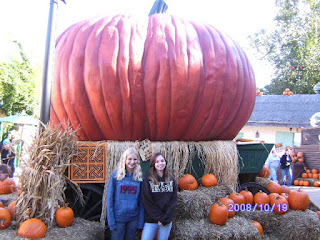 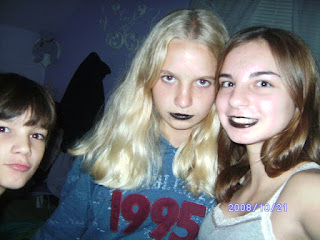 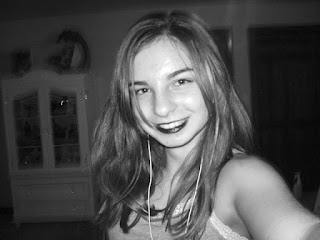 Liam had his follow up evaluation at the NICU for a six month check up. We are behind by a month (he is 7 months corrected age now) and it was fun to see the Dr but really pointless for us. Nothing was said that I didn't already know and that we aren't already working with Liam on. To go by his age corrected he should be doing a whole lot more than he is. But it's important to remember that he has improved a lot over this past month and we can only pray and work with him in the hopes that he will continue to improve! 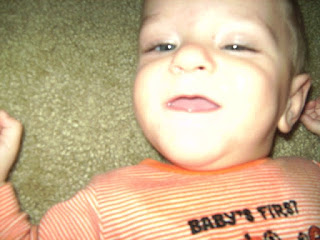 I am so excited eith Liam's improvements this month. Liam's CVI (vision impairment) means he is supposed to see better out of his side vision and not directly in front for now. But with his laser eye surgery they had to sacrifice some aspects of his side vision in order to save his retinas. Our vision therapist has so much wonderful information that you would never think of if you didn't have an impaired child. One of those things is when you approach Liam that you don't talk to him. Give him the chance to see you first. Well, I keep trying to bob back and forth over Liam to get him to see me and he just wasn't locking on to me. So one time, I got over him in his bed and I was very quiet and I moved my mouth up and down in a way that I normally do when I make this sound that Liam loves to grin at. But I didn't make the sound- just moved my mouth... and he grinned!! He saw me! We are so excited because that is huge progress! Liam seems to be "seeing" me better as well. And get this- when we were at the book store I held up this toddler book with chickies on it and he grinned! And then he proceeded to grin through the whole book! Obviously we have no idea what his acuity is but as long as his eyes stay in good functioning shape we have no reason not to conclude that his vision will continue to get better and better!

Liam's head control is getting better too. He's had it rough trying to get control of his head and it has been a battle and still continues to be but he has made huge improvements this month. He is getting it all the way up on his own when he is on his tummy and he is able to hold it there for longer than before! I also carry him in a certain way now that allows him to "stack" his head (that's what Pt calls it) so when he is on my chest facing out he can keep his own head up. I don't have to help him. And that's a huge improvement because he used to just fall forward all the time. 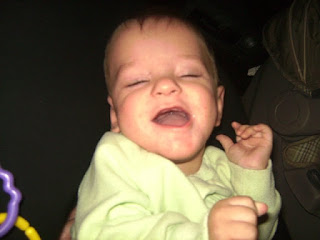 We also finally introduced real food to Liam this month. Which ended up causing problems and a setback. Vision therapy is excited for Liam to start foods but physical therapy wants to make sure he is fully ready. But the people who are really able to look at Liam and say for sure is an occupational therapist and we haven't really had one of those. Remember when I said we had finally gotten one and I was excited about it because Liam is ready for one? Well we still haven't seen one yet. We were able to get one from outside the county who has her own practice and she will finally start for us this next Mon. She is supposed to help us with feeding and issue related to that. But I got tired of waiting so I introduced carrots to Liam last week. Our vision therapist said to put his hand in the food and then bring his hand to his mouth so he can tastes them that way. So I did and he did great! So the next night (when we were in VA) my mom was supposed to do the same thing but she decide to try with a spoon instead. And Liam loved it. So the next night I did the same thing but with a spoon. Liam was doing really well eating from the spoon. We were just giving him little bit at a time so it took 3 days for him to finish the one jar of carrots. But I thought that was great progress and was so proud of him! Yet when I told our PT she got nervous. She was afraid that I might not know what to look for with an oral aversion and she didn't want us to set Liam back any with his progress (he's been orally defensive before). So I thought I would just hold off until OT came (thinking she was coming that week). Well, it didn't matter because by the time the weekend rolled around Liam was constipated, refluxing like crazy and in pain. I was so frustrated. We had his reflux under control and now he was in bad shape with it. Not much was staying down and he clearly could not get out the poo. I had to help him get some out (not fun for either of us) and he was still refluxing and constipated. We went to the er for an xray to make sure it wasn't too big to pass and they said it wasn't and to just give him some time. We did a few enema's and some suppositories and he finally worked all the hard stuff out. But he is still refluxing a couple of times a day now. And we have not been able to get back up to his normal feeding schedule. I hate being a food nazi but he doesn't eat that much to begin with! So, needless to say, we haven't done anymore carrots and when we do go back to solids we are going to have to be very careful. I did start Liam on prune juice (less than an ounce a day) and that seems to be keeping him very regular. I don't think he has lost any weight but I'm sure he hasn't gained much either. Well- we are off for trick or treating! Happy Halloween. It's almost Samhain (thats Gaelic for November!).
As told by Jennifer at 1:37 PM