Liam hasn't been his self again this weekend. It started off with him screaming at me for giving him bananas and avocados, which he has normally enjoyed. I thought it might just be that he wasn't digging the texture and made him some peas to eat instead. He yelled at me about those too. So I just fed him a bottle and he did fine. But after that he really wasn't his happy go lucky self anymore. We went through the whole weekend with him not really wanting to do anything and when Monday came around he didn't want to cooperate for his OT at all. She pretty much spent the entire time holding him. Not very effective therapy, well I guess it can be, but not in our situation. He's also been back to gagging again like he was before the Erythromycin.

Same thing happened today, too. Liam had PT this morning and he didn't want to work at all. That isn't like him. Cathy can usually push Liam and get him going but he didn't want to do much. When Marcia, our vision teacher, came by, Liam cried almost the entire time! She could tell right away he was not his usual self.

Mimi was over this evening though and Liam really seemed to snap out of his funk with her. She had him giggling so hard he got the hiccups and threw up. Mimi thought that was funny. So, while he was in a good mood I took advantage and started working with him and he did really well tonight pushing on his arms and getting his head up. I am praying he is over his little attitude and we can get back to business. I do NOT deal well when Liam is not well. When he's happy I am wonderful but when he isn't doing well, I am a bear. 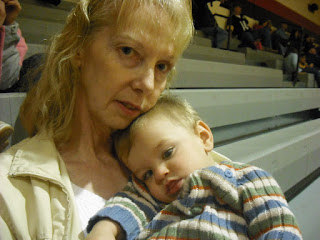