We love having the ipad for Liam. It's been such a blessing for us and him. We can use it for so many things that used to be bulky and large and inconvenient. One of the things I used for Liam when he was very small was a large light box. We would put black and white patterns on it, turn it on and have him focus on the images to help improve his sight. I would use it every night while doing tummy time on the floor. We gradually moved to colors and shapes and eventually it became a nuisance because it just sat around not being used anymore because Liam's vision had improved so much.

By using a light box app we can use the colorful holiday window gel clings for even more fun activities with the iPad. We have Liam pick out what colors he wants to use first or ask him which pumpkin is bigger.

It's just one more thing that we can do on this little pad that makes his world so much more fun. 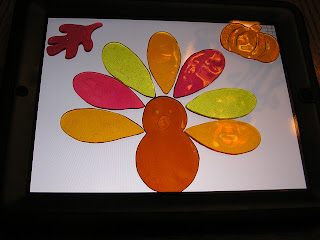