When I say Liam has no head control, I mean he has absolutely none. He can not balance his noggin up on his little neck. He will either let it fall back in order to keep it held up by his shoulders (called stacking) or he will fall forward where he can not pick it up to save his life. Literally. He can not pick it up (which is because of his very low trunk tone).We can shout, encourage, tease and prompt, but the muscles used to pick his head up do not respond and he will leave it down on his chest.

Liam doesn't like his head stacked or fallen forward so he tries to correct it. When it's stacked he will try to bring it in correct position and then once it gets upright it will fall forward where his head hangs down on his chest. This in turn makes him upset and he will use all the wrong muscles to try to upright himself and it just propels himself even farther forward making his body round into a ball. It makes breathing pretty difficult at that point.

We've been tossing around the idea of a neck brace for years. Therapists don't like to use them because they want the child to learn to hold their head on their own. But Liam is 4 years old and head control is still out of his grasp. We needed something to make learning in his chair easier. 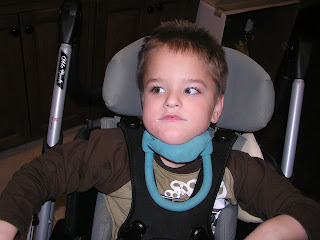 We finally found this neck brace for him to be able to use. It is open at the neck front keeping his airway nice and clear. It wraps around the back with just a 2 inch piece wide of material that is soft and comfortable. We can attach it in seconds and he can then rest his chin and be upright allowing him to play. 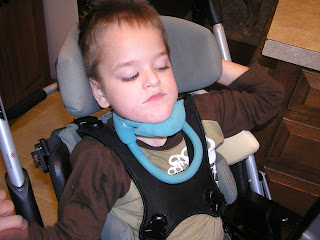 It's been really helpful. I'm surprised at the simple construction and how well it actually supports him. We can use it in the stander and in his chair. I can actually leave him alone in his chair for the first time. He tolerates it for long periods of time. I can usually tell when he's done because he will fight against it by pushing forward with his head (which is what he does when he doesn't wear it). 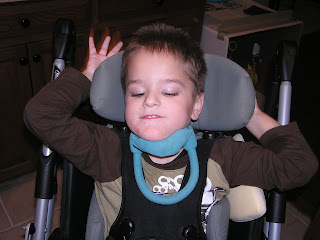 We still do a lot of work with out it. Some days Liam will do well holding his head up in his chair, leaned against the head rest. But when we are working on specific tasks like communication, it's been a huge relief to take the head control out of the equation so he can work only on one task at a time.