Cathy brought Liam a neoprene girdle belt today. Liam is a very good little boy and doesn't hardly fuss much let alone get hurt and cry but he showed Cathy today that he does have feelings and they do get hurt sometimes. He cried his very sad puppy cry while he had on his new girdle belt. I think he felt too much like a girl trying to suck herself into pants that are too tight or maybe it was just the mark left on his chin after wards. Whatever the reason, he was very emotional over the whole experience and decided it was too much for today.

Cathy said to just leave the torture device here and she would work with him again next week because she liked what he was doing in it.

I'm so naughty that I decided to try him in it again and see how he would sit in his bumbo since Cathy didn't try that. Wasn't so bad the second time around... 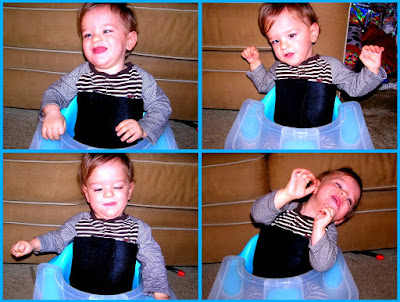 Even when he fell over he was still laughing. Such a happy boy.
As told by Jennifer at 4:29 PM

Adroable. Liam has his first Spanx. He looks great in his Bumbo!

Hey, that's a neat idea. I'll have to ask my OT about it. It looks like it really helps with trunk support.

Oh Liam Sweets, your too funny not to mention adorable. You always make me smile.