Liam has volume limits due to delayed emptying of his tummy and reflux. Because he only takes in around 12 ounces of formula a day, we have resorted to getting as many high calorie additives into his solids as we can.

We have accumulated quite an arsenal against the necessity of a gastronmoy tube.

Luckily Liam has continued to slowly gain enough weight to keep a g-tube back in the recesses of our mind.

But, in order to keep him nutritionally supplied we have had to resort to putting high calorie additives, vitamins, and medicines to his solids. 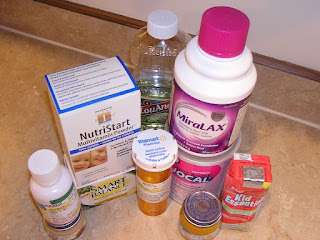 For breakfast Liam gets Soy Baby yogurt or Boost with rice. I then add a scoop of Duocal (dried and powdered oils), his erythromycin (to help with emptying) and choline (great for the brain). This equals 115 calories or more depending on the amount of rice.

He gets a 3-4 ounce bottle Boost with a scoop of Duocal before his midmorning nap. 145 calories.

Lunch is always a jar of chicken (I'm now starting to add a few teaspoons of a veggie to it), scoop of Duocal, his NutriStart multivitamin, and a tablespoon of butter or safflower oil along with a teaspoon of flax seed. 255 calories.

Dinner consists of a multi nutritional food (mac and cheese with veggies, ham and rice with pineapple, etc.) Duocal, and tablespoon of safflower oil or butter. 285 calories.

On a good day, with no vomiting, Liam will take in over a thousand calories with this routine.

On a good day.

We usually don't go a day without vomiting but after increasing his prevacid dose and continuing back on the erythromycin, his reflux has been under better control as of late. While it isn't ideal beacuse he is getting a large portion of his fats through oils, it is enough of a nutritional balance with his jarred foods, Boost and multivitamin to keep him healthy.

And healthy he is as of today. He has been virus free and feeling like his happy, giggly ole self. 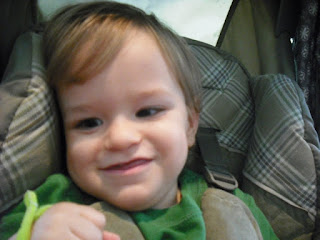 Do the additives make Liam constipated?

I enjoyed reading your blog today....What a cute picturs.
Love it when I have time to do blog hopping...I always enjoy finding new blogs!
This month I am posting on our Disney trip.

Holy cow :) I think I just gained a pound reading your blog!!!

The pic is adorable btw!

Wow! But he's so cute he is so totally all worth it! :) Also, I have an award for you on my blog!

Delighted to meet you and follow along in the preciousness of your family. I love the photos, such joy. I found you via Jill' site, what a joy to splash around with you today.

Also, I am going to re tag you on my Honest Scrap award soon!!! SO look out for that one...he he he

Thanks again so much for giving me an award!!