We had to hire a private OT for Liam recently. He gets OT through our early intervention services already. But, after the evaluation at Chapel Hill with an OT who said Liam needed two hours a week just on his feedings, I knew we needed to get some one else on board to help him. Our original OT just doesn't have the time to do it. And she is all for making sure Liam gets what he needs. I really have awesome therapists who are very humble and although they take pride in what they do they are always willing and open to learn new things or bring in new people.

We had our first appointment with our new OT this past week. Of course, since it was the first appointment it was long, but I learned more things about Liam, was given new things for him to work on, and was told that he did some great things. It's always nice to hear that he's doing "great things".
1)She did a full oral stimulation with out him gagging.
2)He lateralized his tongue (moved it to the left and right from center)
3)He took food off the spoon instead of me putting it in his mouth for him.

She has changed how I feed him with the spoon. It's difficult because it is taking longer and I like the old way in order to get done quicker. But, it won't help Liam in the long run so I am having to retrain myself as well. And it stinks. I don't like having to feed him this way. I don't think he's really fond of it either. He seems to do a lot more gagging. He hasn't thrown up at feedings in a while and since I started this new way he's thrown up 3 times. I just don't have it down right yet and can't do it as well as the therapist! And the spoon is 3 times as big as the old ones! 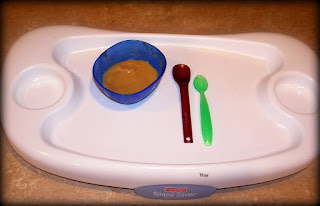 I know he will get it. It's just one more thing to add to my list of things I need to be patient on.

Hang in there. We started feeding in April and we had to implement some feeding techniques. It did make feeding longer, but piad off in a few weeks. Randy has gone from eating only stage 2 to at least half a dozen finger foods and puffs in two short months.

Also, I'm not sure if that is a fisher price high chair, but they have the colored (blue) removable tray that can be ordered seperately for only $8.99. I have found that it is difficult for Randy to see some of his foods against the creme colored tray and the blue tray helps tremendously.

Really Tiffany? Cuz It is driving me up the wall! he threw up lunch again today and he wasn't doing that before. I just want to revert to the old way....

And the spoon with the grooves, she said just use it for a few spoonfuls especially if I see him getting overstimulated.

I found that eventually he began to close his mouth for almost every bite without me pressing on his tongue. Maybe it is too much too fast for Liam and you need to ease him into the changes.

Ah, the trusty burgundy spoon :) What's funny is that we even had to transition from that SAME green spoon to the OT spoon! Trust your OT (if it's the same one we have, she's WONDERFUL) and it WILL improve over time. Carter went from refusing all food to now opening wide as soon as he sees the spoon and taking big ol' bites like a "normal" kid. This has all happened in the last 2 months.

Ok, so what is this red spoon? Maybe I need to try one. You know....since Carver quit gagging, his eating has improved. Whatever is causing Liam to throw up is probably just so miserable that eating isn't any fun. I'm not saying that Carver eats perfect - he definitely has coordination issues, but he's enjoying his food more now without the constant gagging. I can't remember if Liam is on any drugs for spasticity or not.. is he? I think Carver's baclofen caused him to gag all of the time.

Something else that we do with Carver is say Ahhhh every time we get ready to put a bite in his mouth. If he doesn't open his mouth for the bite, we tap his bottom lip with the spoon. It took a long time, but now he opens his mouth when he hears the Ahhhhh (thanks to the CI).

Hang in there! The important thing is that you haven't given up.