That's what she said.

We were told when we left the NICU that Liam already had BPD (bronchopulmonary displaysia) due to his premature lungs and because of his 8 weeks of being on a ventilator (4 of which were on the high frequency oscillator due to the development of PIE (pulmonary interstitial edema). His early x-rays showed he had lung damage. It shows up as white marks on the lungs in x-rays and makes the lungs look spongey. It is one of the most common causes for chronic lung disease in children. White male infants are in the highest risk category for this disease. We knew getting sick for Liam could be deadly due to the existing lung damage and because of his underdeveloped lungs. He was classified as having chronic lung disease before he even came home.

In order for Liam to undergo the HBOT treatments we had to have an x-ray done of his chest. We were thrilled to discover that there were no more existing signs of BPD on his lungs. Whatever damage had been present was no longer visible. Liam's lungs have either already regenerated the new lung tissue needed (lungs continue to develop for 5-7 years) or he has been healed.

And I thought Liam's lungs were going to be his toughest obstacle way back then. 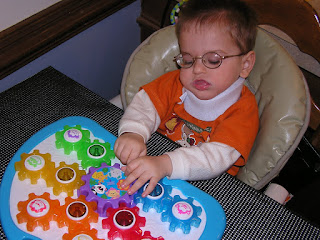 Well, no, not really.

But, he doesn't hate it either. So that's a good thing.

Courtesy of our PT, she got this handy dandy little collar for Liam to be able to work on head control. It won't hold his head up for him. He can break through the collar because it's just made of some nice cushy foam. But what she said it is supposed to do is give Liam the sensation of holding his head up properly when on my hip. And when he's in his high chair he has less of the forward thrusting of his head giving him just the right amount of pressure to remind him where his head needs to be.

The first time we used it in the high chair he was able to sit and watch almost his entire DVD before breaking through the collar and falling forward. That was an incredible feat for him.

We are now using it as one of the many tools to get Liam to hold his head up. For good.