Love and other drugs

We don't normally do anything fancy for Valentine's Day. I've been with my husband for 18 years and I would much rather do something else with money than going out to eat or buying flowers that croak after a few days just because it's the 'day of love'. We try to get out on regular dates already so, we focus on the kids on this day and make it fun for them! 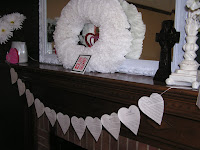 Liam still has a fever and a nasty cough that sends him into fits of nonstop coughing for upwards of 20 minutes. It's heartbreaking. I got so upset that I finally called after hours for his ped's office and happened to get his pediatrician! She could hear him coughing and said she wanted to see him since we are leaving this weekend. So, I brought him in early on lovie day and we spent all morning there. She was running behind and when she finally got in to see us, Liam wouldn't cooperate. But from what she could tell he sounded clear in his lungs. But because his cough was so dry she had us do a nebulizer treatment. It seemed to soften up his cough some so she sent Liam home with his own brand new machine for Valentines day!

At the pharmacy we received an entire box full of nebulizer drugs. Enough to keep him treated every 3-4 hours round the clock until this weekend. I think she means it when she says she wants him better for Sunday.

We rounded out dinner the way we do every year- a heart shaped meatloaf, heart shaped bacon, and a red velvet cake in the shape of what else? A heart. 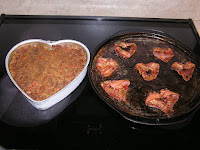 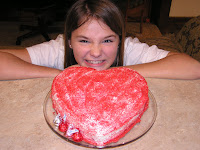