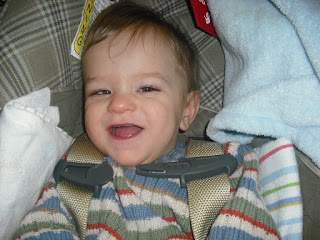 We started with another therapist this past week. For anyone keeping count, Liam now has 5 various therapist, and all of them doing things a bit different but with the same goals. We are now taking Liam to Jacksonville to visit a therapist there who uses cranial sacral therapy. This therapy came to my attention due to the small flat spot on the back of Liam's head. The spot isn't bad so he doesn't need a helmet but his face has shifted slightly out of alignment. The right side of his forehead juts out just a bit and his left cheekbone is slightly back farther than the right and his right ear is about an inch farther forward than his left. I had noticed the slight bulge in his forehead and the flat spot but never noticed the ears until Carla (therapist in VA) mentioned that his ears were out of whack. She suggested CST which I had never heard of. We ended up finding a PT nearby who does it and we had our first appnt this past week. Janelle was very nice and had a lot of information about the way the therapy works. It sounds intriguing and seems like it can have multiple benefits other than just the reshaping of Liams head. We are going to meet with her once a week for a while and see how it goes. But at the least it should help us get Liams head back into alignment.

Liam is doing fabulous this weekend on using his arms to lift his upper body. It's a new skill for him that Cathy has been working on and he seems to slowly be getting the hang of it.

I bought Liam some new board books based off of the brand that Ashley bought Liam all those months ago. It was the first book that Liam attended to. I got four of them and loved all of them but one. I didn't think it had very good pictures. And wouldn't you know- it's the one Liam absolutely loves! He grins from ear to ear and watches the entire thing. I love that he loves to "read". It will help him in so many ways. We are looking at using pictures now for communication for him (to pick out what song he wants to sing, what he wants to eat, etc...).

And Liam finally got his first tooth! Actually he is getting both of his bottom teeth at the same time. Other than one day last week when the buds appeared under his gums and he was a total bear, he has been his normal easy going self. Just the tiniest bit of white is showing right now. I always hated it when my babies got their first teeth. It was a sign to me that their babyhood was offically over. Liams are late in coming and I am sad to see his gumless smile have teeth but it is a milestone that I enjoy seeing as his babyhood has lasted longer than it should (he is 14mo old or 10 mo adjusted)!
As told by Jennifer at 10:44 AM

We have never done CST but I have heard great things about it. That is great Liam is pushing himself up on his arms.
Things come at a different pace with our kids but when they come we could not be happier. The day Elizabeth climbed on the coffee table I was exctatic. As busy as we can get we never miss out on those little things that others may never see. That is a blessing in itself.