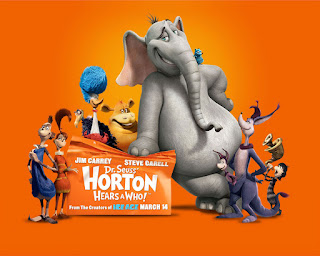 This is sanctity of life week and as we enter into the anniversary month of 35 years of Roe v. Wade I thought it more than appropriate to finally post my Horton Hears A Who post. And I know you are asking what those two things have in common, eh? Quite a lot, actually!

I found myself watching the movie with my kids recently and enjoying how much it followed the book. And it struck me how very important the message in that movie was. How many times have I read this book?? Why didn't I grasp it before? I realized how profound Horton is. Horton tries to get across to his neighbors that "A person's a person no matter how small!" but they don't believe there are even any persons on his speck of dust. Yet Horton risks his life and his reputation to make sure he does everything he can to save those persons that he knows exist. Now- these persons he wants to save are so little that no one else can see them and no one else can hear them, yet Horton KNOWS that their lives have value and meaning even though they are so small. Why? because Horton is pro-life! (Suck in a big gasp of air here) yes- he's PRO-LIFE (yes, I do know that Seuss said he did not want this story to be portrayed in that light)!

With the throwing around of words and making the issue of abortion being a woman's choice, we have mostly lost site of what it is truly about. It's about destroying a person. The bible says thou shall not kill. Our law says you must be punished, even with the death penalty, for committing murder, but by dehumanizing a person and giving them the status of fetus we have reduced the killing of people to "it's a woman's choice".

I know- some of you may be gasping at my words. You have bought the line about it being a woman's choice and you are pro-woman, pro-choice and you can't see what I'm really saying. All you can hear is that I believe in taking away a woman's right to choose. That's not what this is about. I am saying to you this: A person is a person, no matter how small. The sixth week of gestation (maybe only two weeks after most woman find themselves pregnant) the developing person has their heart and brain activity. By the end of the 12th week the little person is scientifically called a fetus. Fetus is Latin for offspring, by the way. And your little offspring is a person. That group of cells doesn't develop into a frog, dog or cow. What else is an abortion doing if not murdering a person?

Let's think about Horton and how hard he wanted to save the persons he knew existed even though they were so small he couldn't see them. It is no different today... for the world we live in doesn't see the tiniest persons of all, either. They are hidden in the wombs of women. They are tossed in the trash and pretended that they never existed. If only we could all believe like Horton does...because a person's a person, no matter how small.
As told by Jennifer at 7:09 AM

Jennifer, I just recently found your blog and your post has made me want to post a comment for my first time ever as a Google Blogger. All I can say is...BRAVO!!! Thank you for having the strength and courage to stand up for the lives of these precious little angels in a world that has been so desensitized to the crime of abortion. Due to pregnancy complications it was suggested we terminate our pregnancy at 18 weeks. 18 WEEKS?!!?!? I was feeling her move by then! I am so grateful I listened to my heart and God's word because my daughter was born completely healthy!! Early...but healthy. She is living proof that the lives of these little peanuts should be left in the hands of God!
I am in the process of blogging her story if you're interested.
http://diaryofahappywhitewoman-sassy.blogspot.com/

As someone who has had an abortion, I have insight on this issue. When I got pregnant when I was young, still in college, and unwed, EVERYONE told me, "have an abortion." I even went to see an adoption agency with the baby's father and he told me, "no way will I give the baby up. Either have it or have an abortion." The agency told me that they couldn't help me unless the baby's father signed the papers (I know now how I could have gotten around that).

Anyway, it broke my heart, but I gave in. And I regret that decision EVERY TIME I THINK ABOUT IT. January 17 was my due date. My baby would be 7 years old.

When people talk about abortion, they never really talk about what happens AFTER you do it. People think that abortion makes "your problem (hello! BABY!)" disappear and you can return to your normal life. NO!!! I couldn't even go into the store because if I passed anything that had to do with babies I broke down into tears. Hysterical tears in a store!!

And now that I have children I realize what a horrible thing abortion is. The heart break of never seeing my child's eyes...I still get really sad over it.

I know I'm forgiven because I've excepted Jesus. But I wish I could go back and change things. I wish society wouldn't act like abortion is no different than getting a hair cut. I wish there was more support for people who are pregnant and need a different option.

I hope that maybe my words will help someone who is scared and pregnant. It is scarier to be without your child than with it. I try and tell everyone this story in hopes it will save a baby's life.

It's the 36th (not 35th) anniversary of a woman's right to choose. According to Wikipedia, Theodore Geisel and his wife opposed the use of Horton as a symbol in the abortion debate. But you are entitled to your opinion, even if the author would disagree. http://en.wikipedia.org/wiki/Horton_Hears_a_Who!

Thanks for the correction- 26 years. And I didn't say that the Geisel's are anti-abortion, I said that the character of Horton was pro-life. We are people before we come out of the womb and Horton's character wonderfully describes what a lot of people already know.

I think your comments are really insightful..Thanks.