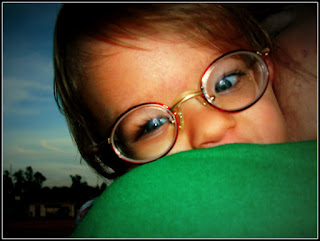 Liam is still running a fever off and on. It's never over 100.5 but it's enough that it can make him pretty cranky. He's such a normally happy fellow and doesn't usually complain when Cathy does therapy but he didn't want to participate too much this Thursday and was done before his time was up. Which, if you knew him, is very unlike him. He generally loves having Cathy work with him.

Today he napped from 10-12:00 and fell asleep again at 2 and slept until 4. Clearly he needed to rejuvenate himself! Last week I was lucky to get an hours worth of sleep in! Plus, he is refusing to eat his night time bottle. I would be freaking out (kinda am) but I keep reminding myself he doesn't feel too hot (well actually he does, ha) and that I don't like eating when I don't feel good either.

Liam does this weird thing when he is on his tummy. And It ticks him off. He will bring his arms up behind his head, grab his hair and then tighten up his arms, back and neck to where he looks like he is trying to burrow into the carpet head first. When he finally realizes he is going nowhere he will relax. But he usually, at that point, has a death grip on his hair and he doesn't let go so he cries out in pain.

The ABM therapist said not to put Liam on his tummy right now because he is getting no where when he does that and he is using the wrong muscles and wrong movements and that's not the pattern we want him to continue to do. So I have worked a lot with Liam in side lying and with his rolling. He is doing really good in side lying. As you can see here. He couldn't lay like this a couple of months ago. 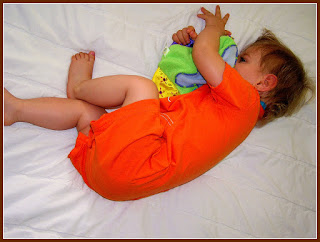 He would arch out of the position every time we put him in it. He is also bringing his arms in midline and holding them in a more natural relaxed position. It's very nice to see. Where he started and where he is now are like night and day!

But I have noticed that all of the time away from being on his tummy has caused Liam to go downhill in his head lifting. He was regularly increasing the seconds he would hold his head up but has not been able to do as well recently. I know that is because I haven't been putting him on his tummy. Partly because he does his little burrowing act and he gets so mad and partly because one of the therapists said it wasn't a good idea right now.

I don't want Liam to backtrack. Every gain he makes is a milestone and we need to keep his milestones coming. So, I started putting him back on his tummy again this week. I already, after just a couple of days, have seen him working again to get his head up. But the coolest thing is that he is using his arms (all by himself) to try and push up. I don't think he has ever really done that before. I normally have to help him bear weight on his arms. But tonight he seemed to be kicking the muscles in on his own and was pushing up with them just the slightest bit.

I told you, I'll take every milestone I can get!

Awesome! Yay Liam! (The pushing up with his arms part, not the fever!) Poor little guy, hope he is feeling better soon.

Poor guy, I hate he's not feeling well!!! But it's so exciting he's trying to push up on his arms!!! What I've seen with Dax is that sometimes you can teach and teach and teach, but when it clicks, it's clicks!!! And these little tinkers dinitely do things when and how THEY want to :)

Everything is in small increments but they do all add to a new mastered skill in time. It is good to hear he is doing better with holding his headup, I can see how you would want to follow ABM's suggestions but at the same time you don't want to lose what he has gained. I always say I take the eclectic approach a little of everything, your his mom and you really know him best.

I have been checking Liam's blog since I joined PBM in November and I want you to know that from the outside i see tremendous progress. He seems to be gaining body control everyday and his face just seems to be more engaged and alive. You should feel very encouraged with his progress.