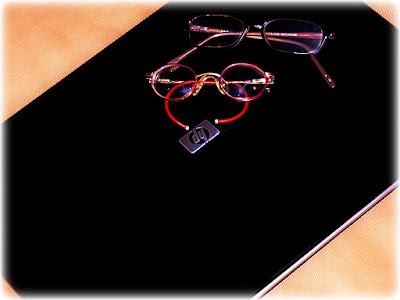 At Liam's first appointment with Dr. D. last month, she put a black and white drum in front of him and spun it. She said it was a tool used to check for cortical visual impairment (which Liam has been diagnosed as having). She spun the drum and said that proper visual response would be for the eyes to "jerk" in the opposite direction that the drum is spinning. Liam's eyes didn't jerk. As a matter of fact, he didn't pay any attention to the drum. He was looking everywhere but at the drum.

She then dilated his eyes and checked things out before putting on a pair of spectacles that would be in his corrected lens. She spun the drum again and "thought" she "might" have seen a bit of "jerk" with the lenses on. His eyes were dilated so big that I didn't take much stock in that assumption.

We are now a month out from our initial appointment with Dr. D. and she wanted to see him back to see how he was doing with his corrected lenses. She asked me how I thought he was doing. I told her that I thought he was doing fabulous because before the glasses he didn't care one smidge about Baby Einstein DVD's and now he will watch them! That, to me, was incredible!

We then sat in the chair and she put the CVI drum in front of him again.

She started spinning it.

And Liam started laughing at it!

He was looking at it and his eyes "jerked"! How awesome is that? She said she really felt that Liam's CVI will start to fall by the way side now and that his vision should improve a lot now that he has the corrected lenses!

We do still have the problem with his esotropia (eye turning in) and we will address that at his next follow up in one month. She wanted to give his eyes ample time to adjust to the glasses before resorting to patching.

I really should pray about that because I honestly have never done so for his esotropia. I just haven't thought to do so as all my prayers tend to focus on head control (as if asking for only that one thing will make God more inclined to do it). I would LOVE for Liam to start focusing both eyes at the same time so he doesn't need patching. Hmm. I think I've had my mind opened to the fact that I should be praying about it. So, I will.

*Oh- and yes, those are Liam's glasses and my glasses on my laptop.

I figured you were wondering.

How awesome! That's so great for the both of you...I'm sure it's a huge relief for you.