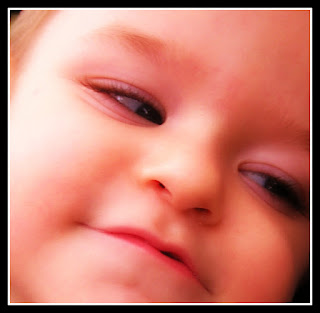 In a world where your hopes and dreams are dashed, then an alternate reality and plans set in, it is always fantastic to get good news, no matter how small it is. Every leap, every step, is seen as a huge achievement and a new milestone met.

So, I was very excited with today's new development.

Liam had a follow up at Duke for his vision. For some reason, Liam's eyes work but his brain doesn't process everything he sees properly. Because vision for Liam can change over the next few years, and because he is always at risk for retinal detachment due to his eye laser surgery so early on in his life, he gets monitored at least every 6 months at Duke.

When we get there we get taken back into a room where they run lights across his field of vision to see if he will track them. Liam has been tracking from right to left and back for quite some time. But today was different. Not only did he track from right to left again; he did it fast and he did it with excitement. He kept up with her. He has never done that before now.

He tracked for the first time up and down!!

I was so excited! And so very proud. He has never looked up for anything before; he prefers to look down or straight out. And then she turned the toy off. She brought it up and down in his sight again and he followed it. With no lights! This is such good news for him. It means he is processing even more of his vision now and he is wanting to see the things that interest him!

He has made a big jump in his tracking skills since his last appointment 4 months ago. The technician noticed it right away too and was thrilled to see that he had made this progress.

I'm just excited that he has made this step at all!

Jen, I'm so happy to hear about the progress Liam is making with his vision!! Yeah Liam! And the recent pictures you posted are adorable, a very handsome little man.