Swine flu; look at you.

After hearing all of the fear and hype over the swine flu, it has put the fear of God into most people these days. No one wants to get it. People are afraid. I've been worried. The CDC is saying how it is affecting little ones worse than the usual flu, especially the compromised kids. People are antsy, waiting to get the H1N1 vaccine when it finally becomes available and worried at the same time on whether they should considering it is so new.

But, this sucker is traveling quickly and spreading like wild fire. And guess who gets it?

So what does the dreaded swine flu look like? 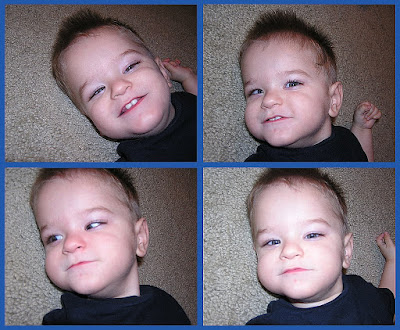 Well, for us, it's a baby who is happy as long as his fever is down.

It's a little boy who is smiley and playful and still eating just like normal.

This isn't the dreaded swine flu I was warned about. While it may be horrible for some, my immune compromised, lung damaged, GERD, CP, little boy is handling it like a champ!

We actually would have had no idea he had it.

Rylie was sick a bit last week, just feeling down and running a fever off and on. Nothing major except for being really tired, worn out almost.

This week, Liam was running a low grade fever for two days. Because he was feeling fine, I never checked it, I just could tell he had one. The third day into the fever he woke up with a 102 degree one and I treated it with Motrin. On day four, his entire mouth was covered in huge splotches of white. That was a new one. After 4 kids, I had never seen that. So, I took him in to see Dr. Kid. Dr Kid took one look at his mouth, said he had Thrush and then said let's check him for the flu.

The results came back positive, of course, and I was a bit shocked. She put him on Tamiflu to treat it. I asked her if it was the swine flu since Liam has already had his flu shot for the year. She said yes, that it was traveling quickly and he was 'highly contagious' but that luckily the flu was very mild.

Wow!!! I hope he's feeling better. Love the pictures though!!! LOL!!!
I am so worried about the "swine flu", but I also think we had it here! Our doctors wont test for it...the are just saying treat the symptoms...so I am SURE we've had it here...I am not looking forward to this cold/flu season!
Good luck with everything!