Shawn and I (as chaperon's), along with Rylie, Ian and our contingency from Temple, headed to Liberty University in Lynchburg, Virginia to attend Winterfest. We rung in the new year with 8000 teens, pre-teens and youth leaders while listening to some awesome music and praising God. It was a two day event with speakers, performers and some major Christian bands such as MercyMe, Skillet, Switchfoot, Barlow Girl, etc... If you haven't been and you are in the area, I recommend checking it out for next year. They really know how to put on a show up there. I hope we can do it again next year.

2010 looks to be a busy year for us. It seems like there is going to be something going on every month from now until July. We may have a couple of surgeries coming up and between my husbands business trips, HBOT and camps, we have a lot to look forward too.

Did I say surgery? Yeah. We have Liam scheduled for g-tube placement at the end of Jan. But, again, we might be holding off on it. Liam does a great job of keeping us on our toes and while I scheduled the surgery back in December when he was having some bigger issues, he has now decided to cooperate and is doing better. I'll talk more on that in another post. =)

Liam is doing really well. I haven't been able to work with him much therapeutically as of late, but he is making new changes all the time.

***Tonight when I asked him where his daddy was he turned and looked at him!

Then when I asked where his brother was he turned and looked at him! It was awesome!! And hilarious because he turned his eyes toward them first and then followed with his head.

***He played in midline today with his therapist (it's a big deal cuz when she puts him over her leg to play on his tummy he almost always flings his arms out to the side and he kept them there and was all relaxed while playing with a toy).

***Liam is holding his head up all on his own while on his wedge pillow for up to a minute.

***He is using his arms to push while he is on the wedge (which he has never done before!). And he has even pushed his head all the way up all by himself once this past week! 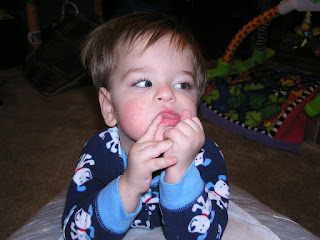 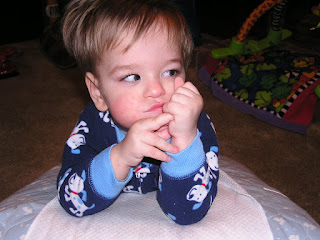 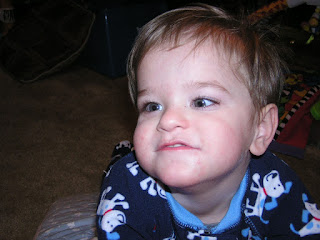 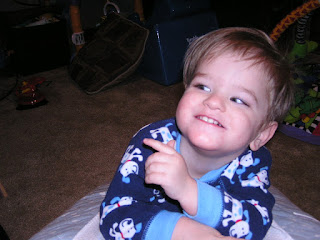