We got a great report from Liam's most recent eye exam. We saw the specialist at Duke today who pronounced Liam's eyes beautiful and functionally perfect. He is still near-sighted (always will be from his premature birth) but other than that his eyes are awesome. If anyone knows the measurements and is interested, he's a -12 in both eyes. Which is really, really near sighted.

They always check his tracking when we go and although he improved at the last visit he was the same at this one. Liam doesn't track in the traditional sense. Normally you will follow an item with your eyes and turn your head as you follow it. Liam lets the object get out of his sight and then jerks his head over to find it. He doesn't track or follow objects well. Unless it's his books. He does seem to track those regularly but still not as smooth as he should.

So, great news all around though and we don't have to go back for another year! Liam says: 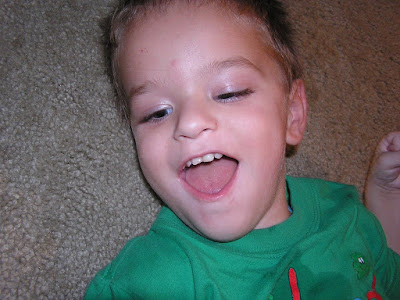 Now, I just need to get him some new glasses because his existing pair is getting too small and he will not keep them on. Ever. It cracks me up that he doesn't use his arms well but can rip off the glasses every time they are on!