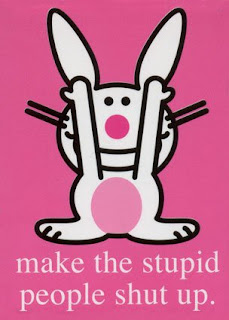 Remember my post about the new neurologist we saw for Liam? He was against stem cells (said they were going to be stopping it at Duke), was against HBOT, and said Liam had athetoid CP? Yeah, him.

I just find out yesterday what he wrote in Liam's report and sent to the team of therapists at our clinic.

Apparently it was so out of line (out of touch with reality is probably more applicable) that his PT said she kept flipping to the front of the report to make sure he was talking about the same boy! She said nothing he wrote sounded like our Liam.

She paraphrased what it said.

First off, this neuro wrote in his report numerous times that Liam was blind. Yes, he is technically blind, but the little dude can see! You've seen the videos of him picking out shapes, colors and pictures. He isn't totally blind. yes, it is a disability but she said he made it sound in the report that he couldn't see anything.

Secondly, he said I pushed to try Sinimet for Liam and that he didn't think it was going to help at all but that because I "pushed" it, he relented. None of that is even true at all. I asked him about trying this medicine and he said we could go ahead and give it a try. I didn't force anything. And remember he said just to call him if I felt it was working...no follow up to actually SEE Liam on a medicine that you have to be weaned off of once you go on it. And guess what?  This supposed non-helping medicine has helped Liam's ataxia a lot! He was so calm in therapy yesterday that they remarked about how controlled his arm movements were!

Thirdly, and this is the one that pisses me off the most, he said that he didn't think continuing therapy was going to help Liam but that if I wanted to continue to go he wouldn't say no to it!

I was so very, very mad.

This Dr. doesn't know a thing about anything! And he's a specialist!

Thank God that Liam's dependency on therapy is not based on his report, because if it was, he wouldn't be able to get it anymore!

And even though I knew I didn't like this Dr's attempts at practicing medicine on my son, it just cemented for me that I would never step foot in his place again.