Liam's adenoid surgery went a little off schedule.  We checked in at 8 to be ready for surgery at 9:30 but when we got Liam back in pre-op the versed made his oxygen sats low so we had to sit with blow by oxygen for a good 20 minutes before they finally took him back. By this time it was 10:15. After being back in surgery for only 10 minutes the Dr and nurses came out and called us back. I knew something was up because normally when surgery is over the Dr comes out to talk to you. Alone.

When we got back there we must have looked a bit scared and confused because he blurted out real quick that Liam was ok.

He told us that his adenoids were not as big as he thought they would be. But that Liam does very narrow passages in there and when he got to really looking he felt that his tonsils actually were very bothersome to him because they didn't leave him much room.  He asked our permission to remove them.

Uh, yeah! Not that I want it to happen but it's what we had been thinking all along.

After surgery Liam was very angry.

Because of the standard two hour recovery time in post-op, and having to have the IV in the entire time, Liam was very angry with us having to hold his arm out of his way for so long. 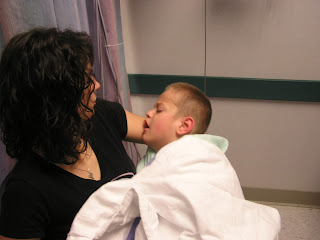 As soon as we took the IV out we left. 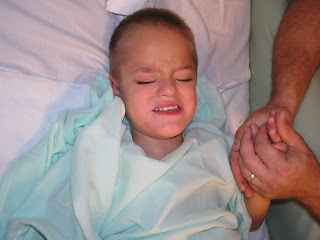 As soon as we got out the door he stopped crying.

He breezed through Wednesday with no problems at all. He laughed and played all afternoon.  But Thursday morning everything must have fully worn off because he felt horrible. He didn't want to stay awake and he cried when he was. Friday, same thing. Today has been the first day that he spent several hours at a time awake and didn't spend it in tears. It probably helped to have friends with little kids over because he loves to watch other kids.

I've been trying to push fluids and yogurt to help him. The worst thing to give him is his meds. They taste nasty and I'm sure with his throat so raw it burns to swallow it. They said it would be better for him to have it by mouth than tube but I don't see how when it taste like drinking almond extract.

I hate to see him in pain and so miserable. But I am so thankful that his tonsils and adenoids have come out. He's been sleeping so much more quietly since. Hopefully even more of his issues will be resolved with the tonsils gone.