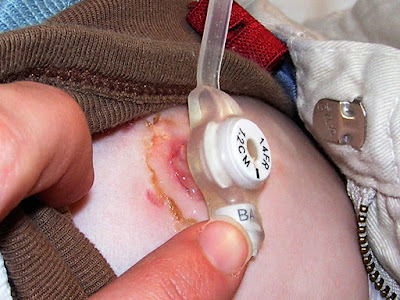 Liam had a small ring of dark blood the other day around his g-tube. I thought it very odd but when I looked at the site it all looked well and there were no tears or bleeding anywhere. The next day when I checked it out and was cleaning the site, I noticed what I can only describe as a large loose flap of skin under the top side of the tube. I racked my brain training to figure out how that had happened and the only thing I could think of was that somehow while he had been in his car seat he had hurt it (I know, I'm new to this g-tube thing). Anyway, I kept an eye through the week and the flap wouldn't adhere or heal to the rest of his tummy.
I figured if it was still bad next week I would take him in.

Liam had PT today and I had Cathy take a look at it. She said it looked like granulation tissue.

I called the ped, took him in and yup...it's granulation tissue.

This was one of my biggest concerns with this tube. I had heard horror stories and I have had numerous people reassure me that it's not a big deal and many people who have never had that problem. But here we are 3 weeks in and he is getting granulation tissue already.

She took some silver nitrate, assured me it doesn't bother Liam, and applied some to the area.

Any and all advice is welcomed on what to do to keep this from becoming a problem.

I have two tips so far- use the 2x2 pads and use Eucalyptus oil to clean it.

Anything else I should know?