Liam has adapted quickly to his dives. The first two-three dives he cried going down but he's been doing wonderful every since. We are slowly getting into a new feeding and nap routine and he's starting to nap during the second dive.

The group we are in consists of Bonnie and her son Ben (on the spectrum and mild cp) Laura and Jonathon and us. That's it!

I've known Laura online since we were both preggo with our twin boys. We were on a message support group for twin pregnancies and both of our stories ended eerily similar. And now both of our boys are effected by CP. Although they are effected a bit differently they are affected the same in that they have arm issues and no head control. It's been so good to finally meet them both. We have so much in common.

Last night Bonnie and I took our kids out to a Mexican restaurant and had a great time eating and talking. Ben has taken to Rylie and sits with her and grabs her hand when she is around. Yesterday he took her cell phone from her lap and said, "Thank you for sharing!" Then he gave her his gorilla in return.

Yesterday Liam woke up with a high fever of 102. He's still adapting to the air and since it's still cool at night and we no longer have the humidity we are used to, his sinuses have taken a beating. He even has a dry cough right now. Thank God his fever disappeared before our first dive (only two hours later) because we wouldn't have been able to dive if he had had it!

Liam has been exhausted at the end of the day. Where normally he would take a while to fall asleep (he always falls asleep on my chest) he is asleep the moment I lay him down as of late. The other night I laid him on the bed, went around to the other side of the room to adjust the A/C and walked right back to his side of the bed where he was conked out. Last night, he sat perfectly still when I put him in my lap (sucking on his lip as you can see it in this pic) and then was out within seconds. 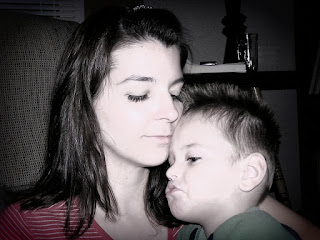