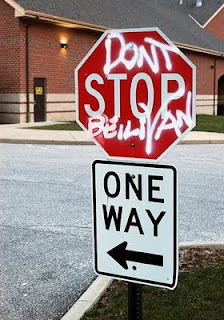 When you come somewhere with the hopes that a treatment might have the key to unlocking something for your child, you might look a little too closely for some positive sign that changes are taking place.

Which is what I really try NOT to do.

But sometimes you just can't help it. Any sign of anything is a big deal.

And I don't want to ever stop believing that God is able.

So, what's new with Liam?

He is regularly giving me and Rylie a "high five"! It's his version, not exactly an open hand high five, but what's so awesome is that he is trying to do it. And for the most part, when he tries, he's getting our hand.

He actually clapped his hands once this week when I asked him too. He knows what it means to clap his hands, he just can't physically do it but he is finally loosening up some in his shoulders and chest to get his arms in front of him and when I asked him to clap he did it. We are working on trying to get him to do it more often.