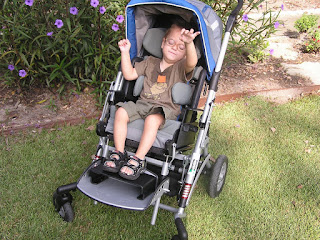 Liam was quickly outgrowing his Eddie Bauer stroller and it wasn't a good fit for him anymore with positioning. We trialed out a couple of stroller/wheelchair combos and although everyone of them had a negative to it, the Otto Bock Kimba was the wisest choice.

It is German made and looks it. It's big. But that is a good thing because it will fit Liam for years. And since insurance only pays for a new one every 3-4 years, we needed something that was going to fit Liam until he was 6 or 7! This one has a lot of room for growth so it's going to last.

From start to finish we got Liam's Kimba within 6 weeks! That was a record for the therapy place we go to. Usually getting a purchase like this takes months and months. 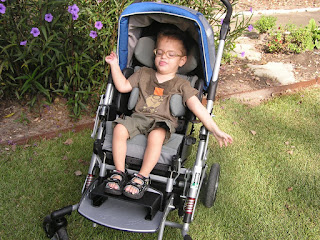 I love having it. It's so nice to have Liam sitting up properly. It is heavy so I have to dismantle the seat from the frame to load it in our truck but it hasn't been too much of a hassle to do so.

This chair had to have some customization done on it. Because Liam retracts his shoulders and keeps his arms out, they made two plates and padded them and installed them behind his side lateral supports. It's great! It prevents Liam from pulling his arms back too far and getting them caught behind the frame of the stroller. 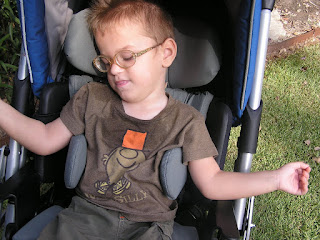 I love that it allows Liam to sit up better and see the world. And although this is officially labeled as a wheelchair, it's nice to still be able to push him in a 'stroller'.