This is a long video, but worth your time if you have kids with special needs.  Doctors won't even know about this treatment or will be against it if they do. Two of the three pediatricians we have seen were against it and two out of our two neurologists were against it. But I know that Liam wouldn't be doing as good as he is today if it weren't for hbot. Even his therapists agree. We've only done 80 dives so far but need to do far more. It's why we raise money for it. It's expensive and insurance won't pay for it and medicaid won't help. Even though it's helping kids get better. 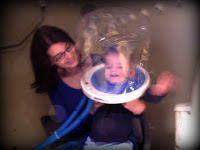 This video is a testament to hyperbaric oxygen treatments and how they saved the life of this little girl who was supposed to die at 2. It's a mom who never gave up hope and wouldn't take no for an answer. This is what we take Liam to do.