I was sitting on the floor against my couch holding Liam in my lap. I was messing with my laptop when he started giggling uncontrollably. I looked at him trying to figure out what was so funny. He was looking toward the tv. Then I noticed that I had forgotten to turn off his video from earlier. I had only turned off the sound. He was laughing because the video was showing one of his favorite moments, when a hand and paintbrush make squiggle lines on the screen in the colors of the rainbow.

This was a major moment! We've wondered at his acuity for quite some time. He could SEE it from 8 feet away! And there was no audible cue to give him an idea of where the video was.

The second thing he did today had to do with the same video. I was holding Liam but had him facing away from the tv. The video changed songs and right as it cued the first few bars of the song, Liam started laughing. When I looked at the tv, it was one of his favorite scenes again. This time, he wasn't using his vision, he was using his hearing to know where the video was. He has the music memorized to the scene.

It gave me chills to see him do that. This kid can't talk or move his body but he has his mind, that's for sure. 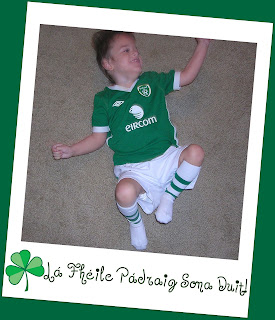