I had never heard of it before either.

It's essentially listening to music through headphones (Auditory Integration Training or AIT).

And Liam loved it! 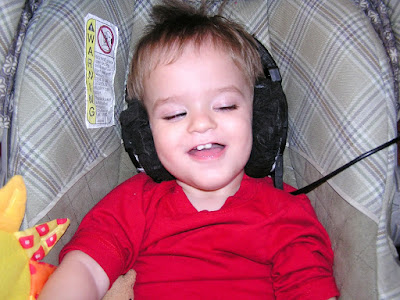 But it is what this music is supposed to do that's so cool!

AIT is presented as a hearing enhancement process. Research suggests that individuals with sensory dysfunctions that make them hyper or hypo sensitive to certain sensory stimulation can benefit from going through AIT.

AIT uses specially designed equipment that randomizes and filters high and low frequencies and intensities. It allows Liam to listen to music with frequencies filtered out letting their hearing adjust, normalize and flatten out the sensitive peaks. Basically, Liam listens to filtered electronically modulated music for ten hours over a period of ten days. The machine electronically selects high and low frequency sounds from the music and Liam then hears those sounds through the headphones. If Liam has any auditory peaks of sensitivity, those frequencies are filtered out either partially or entirely.

Because the high and low frequencies are modified randomly, Liam hears music that is uneven in its tones and it is constantly changing. I'm told the music sounds a bit bizarre, almost as if it's 'drunk'.

For Liam's first 5 days he will hear equal treatments in both ears. But on days 6-10 the sound is reduced in the left ear. This is to enhance the sound going to the left hemisphere. That portion of the brain is responsible for processing speech and language. The goal is to stimulate better left hemisphere development.

There is a big slew of outcomes that could arrive from doing the AIT. I won't bore you with the list, but there are numerous benefits to this treatment.

Miracle Mountain, again going out of their way to make all things possible, provides AIT absolutely FREE of charge. One of Liam's dive buddies had his dad looking into doing it for him. But where he lives, it was $1500 for the 10 day treatment!

The only negative is that we aren't supposed to expose Liam to any high decibel sounds over the next 3-6 months due to sensitivity to noise following treatments.

I guess Liam will have to wear ear plugs for church. Because it's ear blasting in there for him for sure. 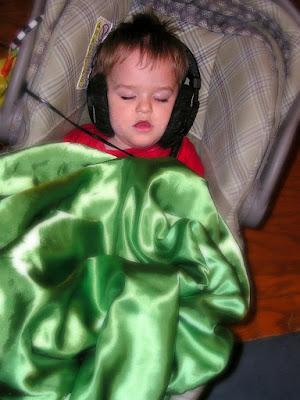 Liam has long days lately and today resulted in no nap until 4 o'clock. He fell asleep with only 5 minutes left on his AIT.