Week One Is Almost Done.

We have now almost finished up our first week of HBOT dives. We have done two a day so we have officially completed 10 and after doing two more tomorrow we will have Sunday off. There is no work on The Lord's Day. Which is awesome, because it's nice to get a break!

Liam is doing very well. Other than crying off and on when we ascend, he's a super champ. He has managed to ascend twice with no tears so he's getting used to it now and was so relaxed for the last two afternoon sessions that he fell asleep, once before we had even finished ascending and I had to force him to stay awake (you are not allowed to sleep while ascending because of barotrauma). 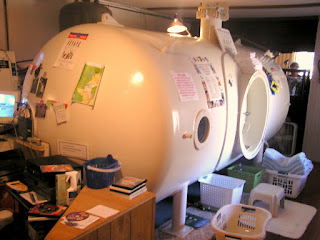 See that little window on the left front side? That's our window to the outside world. The big round circle on the front is obviously the door. The door is sealed here because the chamber was in use when I took the picture.

This is the control area with one of our certified techs, Sharon, who is amazing and very good at what she does! 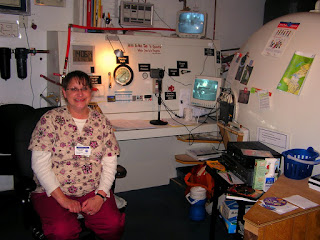 You can see the monitor behind her where she can always see what is going on with us and can hear and communicate with us from there. We always have two techs on hand in case of emergencies. It is a freaky thought to be in the chamber and think that you are locked in and the only way out is from the techs!

While we are in there they vent the chamber two to three times exchanging our exhaled air for fresh compressed air. Which makes our ears pop again.

This is what Liam looks like while he has his oxygen hood on: 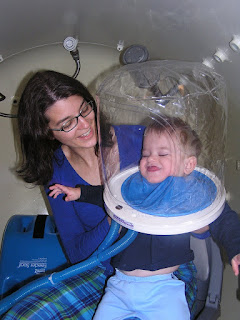 Liam and I got to meet the founder of Miracle Mountain today!

Robert Hartsoe started Miracle Mountain after seeing amazing results after using HBOT with Garrett, their grandson. MM is a not for profit center and they do this work for the love of God and kids. I was originally against coming out here to MM. The hospital is 30 minutes away, there is not a Dr. on staff, it's in the middle of nowhere and even though cheaper than anywhere else, it was still an expense we couldn't afford outright.

But, God slowly opened all the doors for us;
The risk is very, very low that anything bad would happen during the dives. The biggest concern would be seizures, but Liam has never had those. And after learning there are certified techs with 1000 hours before they become certified at MM, we felt comfortable with the fact that there isn't a DR. on staff. It also helped that MM has done over 22,000 dives with never one problem!

We raised all the money to go.

And after reading about Robert's knowledge about the chamber and the results, he put our mind at ease about going.

So, when I talked to Robert today, I told him about my fears at first and how those fears had all been put to rest. He was happy to talk to me and wanted me to make sure I pass on how wonderful Miracle Mountain is.

I'm posting the picture I took of an article posted on the wall of the waiting room. If anyone is at all interested in hearing more about HBOT, or how it works, I suggest reading this article. I also have a study that was done on mice showing how effective HBOT is if any one wants to read it. 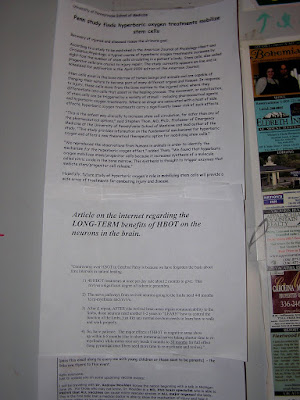 What's so great, is that people everywhere are hearing about HBOT, trying it against medical professionals opinions and seeing amazing results. And then some of these families are opening up chambers all over the US in order to help these kids.